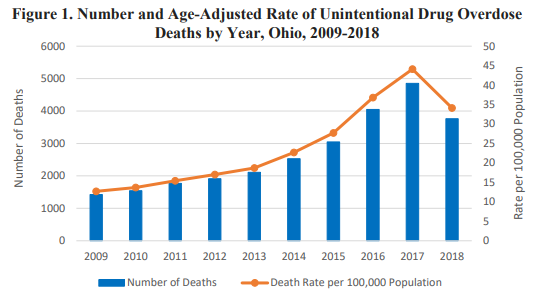 From 2017 to 2018, the rate of unintentional drug overdose deaths decreased by
22.7%, making it the lowest overdose death rate since 2015.
• Beginning in the second quarter of 2017, the number of unintentional overdose
deaths began to decrease, and this trend continued into the first half of 2018.
However, the number of deaths began to increase in the second half of 2018,
with much of the increase occurring in the third quarter. Deaths began to
decrease again in the fourth quarter of 2018. CLICK HERE to view the full report from the Ohio Department of Health